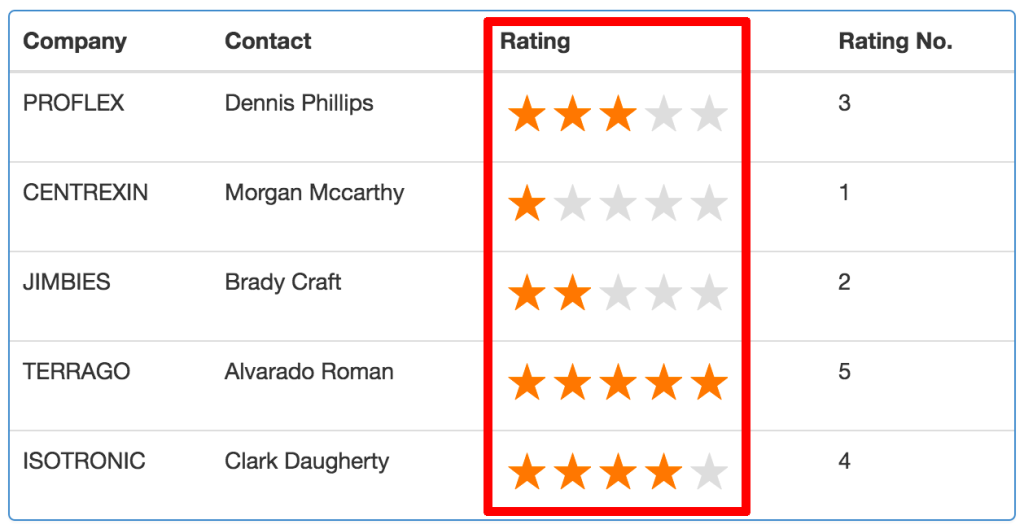 Playing around with Angular 2, I thought that a star-like rating component would be very useful. The idea was to have a rating component for any item within a table or a repeated structure and to be able to rank any of the repeated items in the same page. I put together radio buttons, labels and a lot of CSS to give it the rating stars appearance.

There’s nothing new about the @Component decorator. It has the usual selector, template URL and CSS ref array.

For the radio buttons name, I created a string variable that would contain the name for all the radio buttons in each nested component. The name was a concatenation of the item ID and ‘_rating’, and the value for this variable was assigned within the ngOnInit event. You can find a very nice article about the angular 2 component lifecycle here.

For the template I put together a radio button and a label for each rating (star). Both, the radio button and the label, had its own properties to make the component work properly, as follows:

Notice on the HTML that I started from the highest rating to the lowest. This would help me apply the CSS styles to ratings lower than the clicked/hovered rating using the “~” css selector and then just inverted the order with CSS in order to make it appear from 1 to 5.

The styles played a very important role for this component as it gave the template a stars-like rating appearance. I added comments over each rule within the code.

I decided to put the HTML radio buttons in descending order because it would allow me to select siblings star labels by using the “~” symbols.

For example, if the rating 4 is checked/hovered, the following ratings 3, 2 and 1 will be selected by the CSS rule and will have the same colour.

Once all the elements for the rating components were ready, it was time to put the component in use.

Within a for loop, I added the app-rating tag, which is the selector specified on the rating component. I also included the following attributes:

On the container component class, I imported the rating component and for it to be available within the template, I also included the component in the directives array.

Lastly, I wrote a simple function that would receive an object of type any sent by the rating component. In this function is where I would update the item.

And that’s it! Have a look at the live demo to see how it works.

Here is a demo of a basic table that uses the component. Give it a try!

You can find the code here.